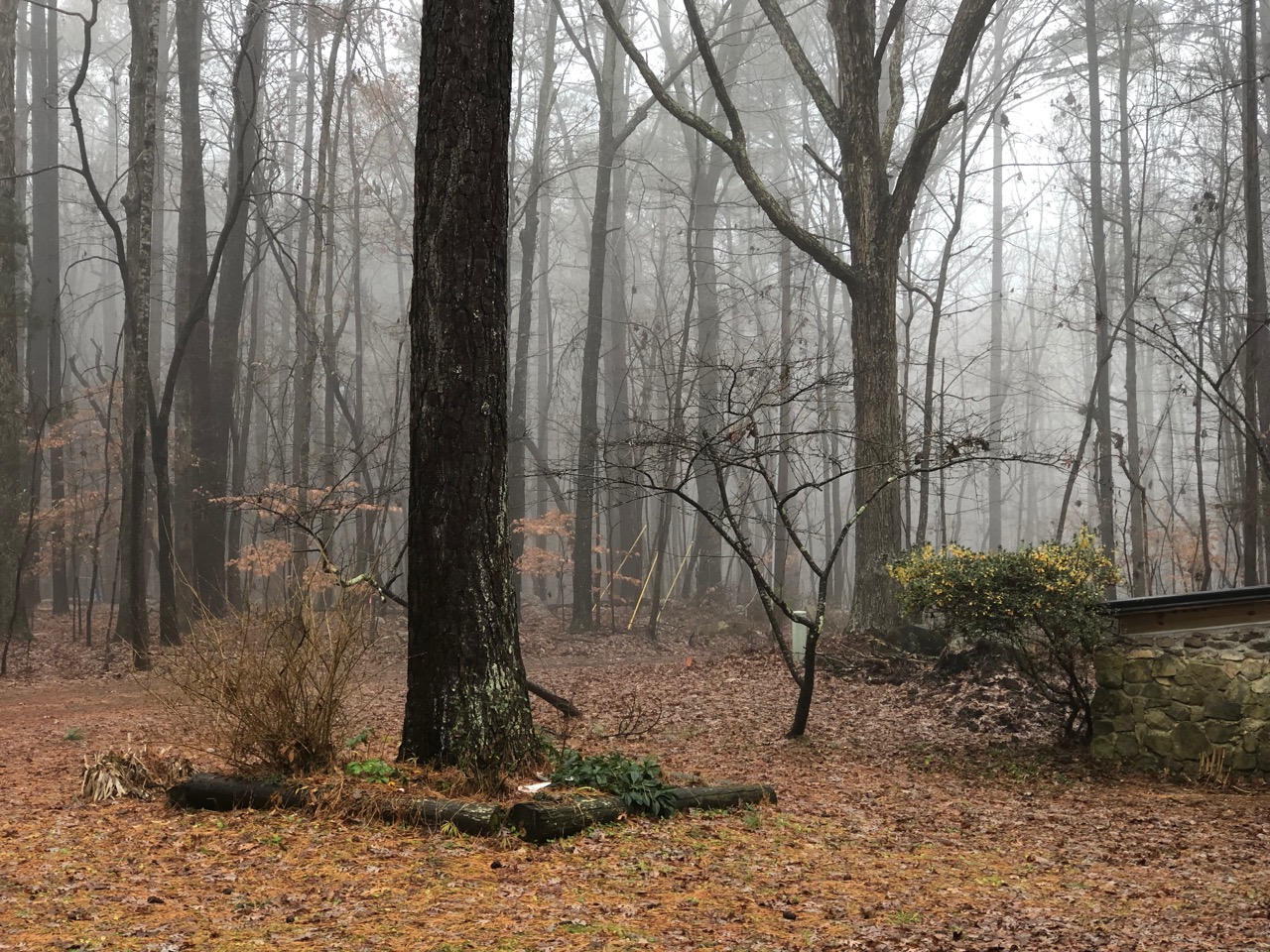 Leaning cherry tree is hiding behind the big pine; both are coming down.

When Erin and I bought this property from Mr. McCallum in 2017, he proudly pointed out the solid brick house he’d built in 1961, as well as the fruit trees he’d planted in the yard. There was an apple tree and two pear trees out back, and four tart cherry trees in front around the well house. The apple tree hadn’t been pruned in a long while, it’s trunk was collecting water and the bark was collecting lines of holes from the sapsuckers, and it wasn’t bearing any fruit. One of the pear trees, though, was abundant with small kieffer pears last summer. The squirrels claimed the tree as their own, sitting in the high branches, peeling the pears, and eating the fruit. In the evening, groups of deer would gather under the tree and eat the peelings.

The cherry trees in the front also gave fruit, most of which the birds go to, but I was able to gather a handful of cherries right just before we went on our trip to the South Pacific. Our move into the house and that trip, along with the late harvest at Levering Orchard, meant I wasn’t able to make the annual drive with my friend Rose Hoban to pick cherries. I set my sights on cherries in 2019.

The cherry tree nearest the gravel road, though, was already leaning at 45-degree angle, with a split at the trunk’s base, and then it got hit by a worker’s truck. I finally cut it down with the chainsaw this winter. The apple tree and two of the other cherry trees were sacrificed last week as we began a major tree removal project to clear around the house for safety and open more sunshine for flower gardens and vegetable boxes. We’ve taken down an old blackjack oak, a bunch of big pine trees, and a couple of tall red oaks. The massive trunks of the oaks will be stacked at the side of property, and in a couple of months Randall the sawyer will pull his mobile mill up to the property to transform the trees into a stack of boards. The boards will sit and dry for a year. Then, I’m hoping Randall the table builder (same guy, Anna’s former teacher at Carolina Friends School) will transform some of the boards into at least one long table that I can set up out back for a summer evening meal.

Yesterday, on my way home from work, I stopped by the Southern States farm store in Carrboro to buy two Balaton and one Montmorency tart cherry trees. There’s also an apricot tree and a Russian pomegranate sapling I purchased earlier that are waiting to be planted out back. I hope this new orchard, and the way Erin and I had the house renovated and updated, will be a fitting tribute to Mr. McCallum.

James Richard ‘Dick’ McCallum died in January. He was 94, a veteran of World War II (he served in the Aleutian Islands), a tradesman, a scout master, and from the charity mailers we continue to receive, a very generous man. We are grateful that he chose to sell this property to us. We had been searching for 15 years for a house to fix up and land on which to garden and tend fruit trees and host long-table dinners. It feels good to be home.