Why I wear the flag patch and this shemagh

When I look at photos of the insurrection at the U.S. Capitol on Jan. 6 (for example, the images that illustrate the cover story of today’s New York Times Magazine) the despair I felt that day remains, much as the horror of watching the twin towers fall on 9/11 is still with me. What a stunningly bad day for our nation, though one we all knew could come.

When I look at those photos of the mob, I wonder if I will eventually recognize someone, or learn that someone I once knew has been arrested because they breached the Capitol and trampled the very freedom they claimed is being taken away from them. Even before that day was over, though, some of my own family were sending me links and clips of crazy conspiracies deflecting blame for the insurrection, as if Donald Trump and the Republican Party hadn’t spent months — years! — plainly, consistently, and clearly lying about the election and our freedoms.

The latest episode of The New Yorker Radio Hour has a fascinating discussion about how QAnon resembles an alternate-reality game.

The conclusion of the segment echoes what Erin’s been telling me for years: keep your family and friends close, no matter how crazy they become, and “expose them to a lot of reality.”

When I look at those photos of the terrorists on the steps of the Capitol, I catch glimpses of certain articles of clothing that make me question my own reality.

I own a lot of GORUCK bags, quality gear made by a former U.S. army soldier. My GR2 and Oliver’s Bullet Ruck backpacks went with us to the South Pacific and back. Both sport American flag patches, as does the Bullet Ruck that I now use as my primary bag when I head into town or on family hikes. I always wonder if I will get comments about the patch, and I’m always ready to respond that I wear the flag proudly because I served this country as a U.S. Peace Corps Volunteer. 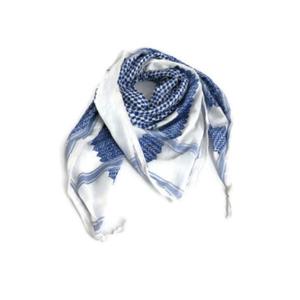 The Peace Corps allowed me and Erin to travel around the world. Even though COVID-19 restrictions kept us from traveling last year, I looked for small ways to continue learning about other places and peoples. I’d read about how a keffiyeh, or shemagh, makes a good scarf to have when you’re traveling the deserts of Africa and the Middle East or just trying to get home when your car breaks down. Last summer, I ordered a cotton Palestinian keffiyeh from Hebron Arts. It’s soft and warm and I wear it around the house. (It reminds of Apeirogon, by Colum McCann.)

There are a lot of flag patches in those photos of the insurrection, and if you look closely, a few shemaghs wrapped around the necks of beefy men dressed in tactical gear. I fleetingly think I should take the patch off my pack so I won’t be associated with those idiots. But both the flag patch and shemagh are commonly worn by soldiers who served the U.S. in Iraq and Afghanistan, and I trust that a lot of soldiers and veterans wear them without planning the overthrow of their own government.

I am confident in the future of this nation.